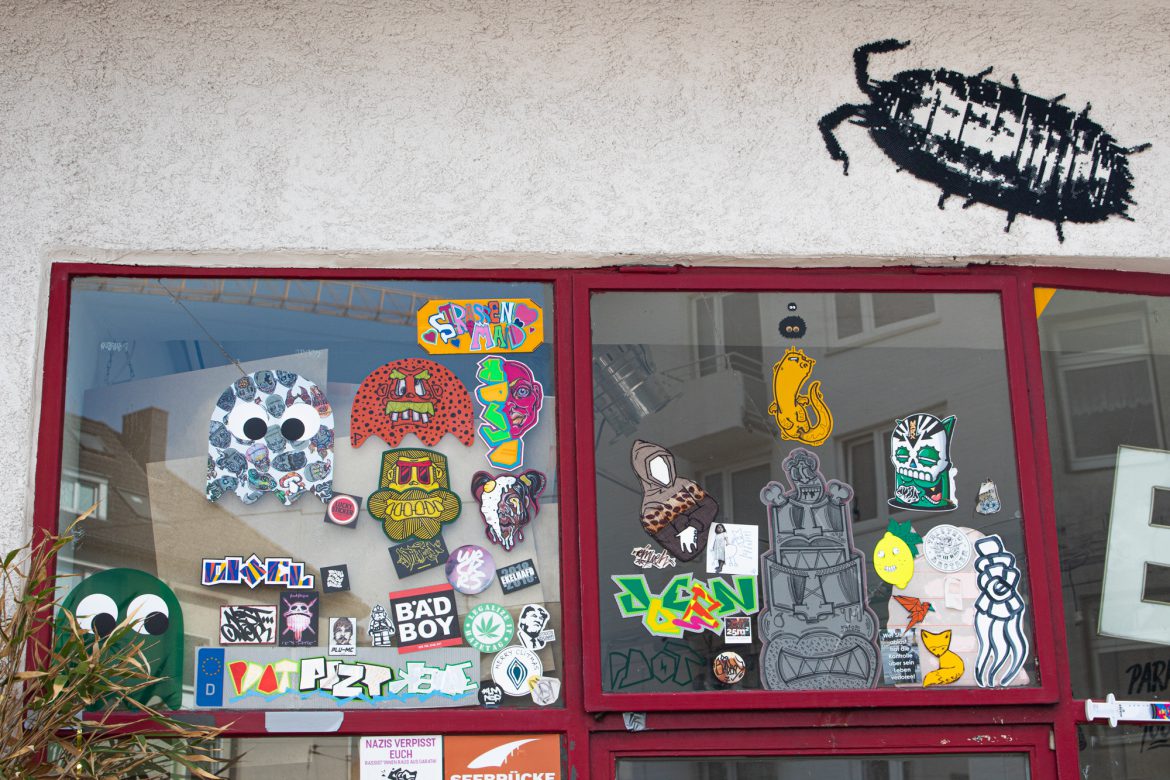 Through this blog, I regularly try to introduce you to the various facets of Düsseldorf, my adopted city. Sometimes international with its Japanese district, sometimes magical with its Christmas markets or festive during the traditional Carnival, the city of Düsseldorf is full of surprises just waiting to be discovered! Following my series of articles on Düsseldorf, I propose you discover the artistic side of this city full of surprises through its street-art. Follow the guide!

To prepare this article, I was invited to take part in the guided tour organised by the Düsseldorf Tourist Office since 2018. The Urban Art Tour takes place every Saturday from 12 to 2 pm and is available in English or German. If you are visiting Düsseldorf, this is a great way to discover the city. Don’t panic, I’m not going to tell you the whole tour because that would spoil the pleasure of discovery a bit and my idea is to make you want to do this guided tour.

On a nice and sunny Saturday, Saskia, an art history student, passionate about street art and former employee of a well-known art gallery in Düsseldorf (I will come back to this at the end of this article), proposes us to start our visit in the North district of the city, located just behind the train station and mainly known for its shops and small North African restaurants. After giving us a brief introduction to the history of street art in Düsseldorf, our visit begins. The program: a tour of about 3 km over a duration of 2 hours.

It all started with…a resistance movement!

Although the “street art” movement started in the 80’s in Germany, street art as we know it on Instagram for example, with large frescoes, graffiti, collages or stickers, really started in the 2010’s in Düsseldorf. For years, local artists were looking for a place to give room to their creativity and after many requests for grants from the city of Düsseldorf, the latter gave them no answer. Not discouraged for a penny, the collective launched a call for a day of protest to which more than 40 artists responded.

The “Licht im Tunnel” (“Light in the Tunnel”) day took place on Saturday, 17 July 2011 in the Ellerstraße tunnel near the station. Why did you choose to decorate this particular tunnel? This subway is a kind of contradiction in the rich city of Düsseldorf – a dilapidated tunnel on the edge of neglect in the middle of districts where millions of euros are being invested. In short, the perfect place to express one’s art and to make an act of rebellion against the city.

An open-air gallery through different neighbourhoods

Another project that deserves a paragraph in this article is the “Auf die 12” located in Helmholtzstraße. This graduation project initiated in 2014 by two students offers 12 artists a place where they can collaborate and display their art. In this case, there is no question that the city has learned from its mistakes and has therefore voluntarily offered this space to be decorated. The themes and artists selected for this project are more conventional – the famous stencil “La Fucking Vie” by L.E.T. is featured. (Les Enfants Terribles, a French artist based in Düsseldorf) which is more in the style of Banksy.

A street full of art and history in Flingern

A street you should also visit (and which is not included in the guided tour) is undoubtedly Kiefernstraße (the pine street in English). Located in the district of South Flingern, it is one of the most colourful and historically charged streets in the whole of Düsseldorf. Each building was built in 1902 by a company to house its workers who worked in the adjoining factory. When the factory closed down, the flats were bought by the state and the tenants were asked to leave their homes so that a shopping area could be created. From then on, a battle began and in 1988 the city allowed the squatters to officially settle until 20018. It is now 2019 and these buildings (and their tenants) are still there. Indeed, the city has decided to extend the leases for an indefinite period of time. A victory won! Today there are more than 800 inhabitants of 45 different nationalities. This history remains engraved in the memories and on the facades of the buildings as many artists have decided to express themselves by leaving their traces everywhere. A fascinating street, isn’t it?

In general, the Flingern district (North and South) is one of the liveliest in the city, with numerous open-air artworks, unusual shops where local artists sell their products and independent galleries that are regularly renewed. Flingern’s southern district has remained mainly residential while the north has become a cultural and commercial epicenter. Unfortunately, all this attention is leading to global gentrification and it is becoming quite difficult to find housing at decent prices as many families decide to move there and big investors are pushing up prices.

Places dedicated to street art all over the city

During our visit we come across various collages, tags or simple stickers. In fact, this is one of the most interesting things I learned on this tour: Düsseldorf is full of art around every corner, but you have to know where to look and want to discover it. This is a bit like the general atmosphere of the city: a curious, interesting city, if you know where and what to look for. With this in mind, we’re heading for Furstenplatz, where the first street art festival took place in 2013. There we find collages that are slowly disappearing, but Saskia’s explanations give them back their youth of yesteryear.

We continue our visit to Brause, one of the best known art centres and bars in the city founded in 2001 and which unfortunately had to close last June after 18 years of promoting local art and culture. By telling us this story Saskia shows us that unfortunately the less “ordinary” arts still have a hard time. We can find there little ghosts of PDOT and a project of the LET (Les Enfants Terribles) but also many stickers, Hama bead creations or even mosaics. Unfortunately, as I write this translation, this place has been razed to the ground and replaced by a hotel… What a shame.

I would also like to share with you two places where many Dusseldorfois meet. Known in Düsseldorf for hosting many events and promoting alternative art, Boui Boui Bilk is located in the Bilk district where you can admire 2 huge murals which are among the largest in the city and, who knows, maybe attend one of the many events organised by this association. The contemporary art center ZAKK located in South Flingern is the meeting point for lovers of alternative culture and also organises many events such as parties, concerts, plays and more.

Latest reads : a lot of YA fantasy but not only…

This site uses Akismet to reduce spam. Learn how your comment data is processed.

A taste of Düsseldorf’s culinary soul