There is no Moin in this article! In southern Germany, it is quite common to say Servus for “hello”. Funny, no? It is precisely in the south of Germany that I’ll take you today! A few weeks ago, my boyfriend and I spend the weekend in Freiburg-im-Breisgau. Freiburg is a city located in southern Germany, in Baden-Württemberg, not far from french and swiss borders.

As for Hambourg, I propose you a little guide of good places and stuffs to do in Freiburg! Los geht’s* (Let’s go)!

Freiburg is a beautiful city, it is crossed by the river Dreisam and is located in the foothills of the famous Black Forest. We stayed with a friend of ours and it turns out that his apartment has a great location near the old town and at the foot of the Schlossberg, a forest (what a sweet name). I’ll be honest with you: I think that Freiburg is a super nice town with small houses typically German, all that stuff, but it’s just … too perfect. It’s almost boring. I don’t know how to explain, but it’s a general feeling that I had. Sorry for the people who live there but I prefer the landscape of the Ruhrgebiet (the industrial region near Düsseldorf/Essen/Dortmund); at least it’s authentic and true, even if it’s not very pretty, filled with abandoned factories and its weird people.

We arrived on Friday night by train; The train in Germany is relatively expensive, it’s better to book your tickets early enough or to benefit from a promotion from the Bahn (the German trains). That’s what we did! We left the car at home and we travelled from Düsseldorf to Freiburg in 4 hours. 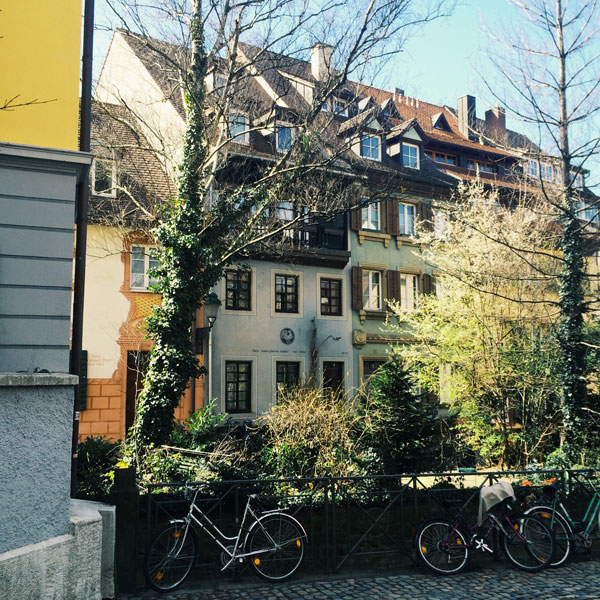 You can go around by bike!

Here are some ideas of things to visit if you spend the weekend in Freiburg: 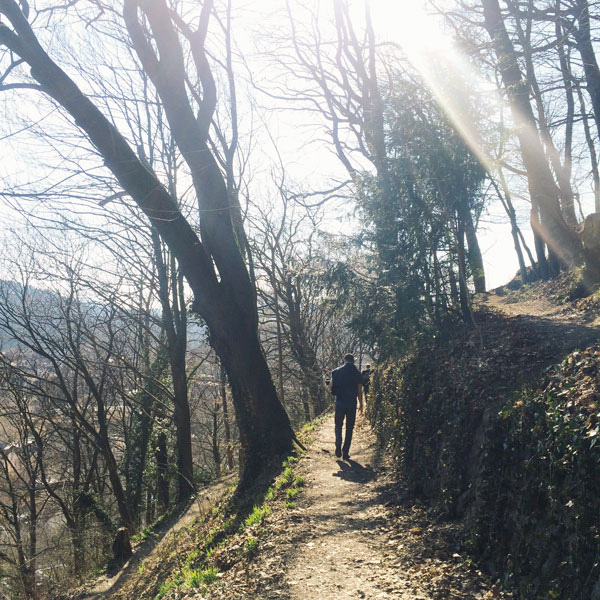 Little trekking day in the Schlossberg. 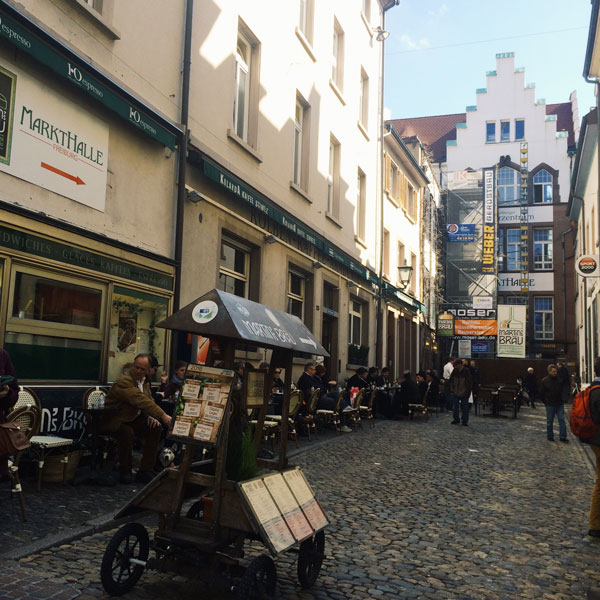 The little streets around the Market 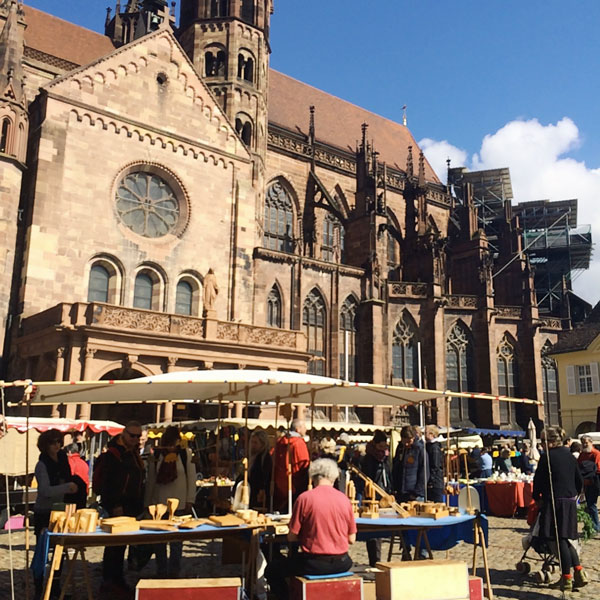 In front of the Cathedral and the Historical Merchant’s House. 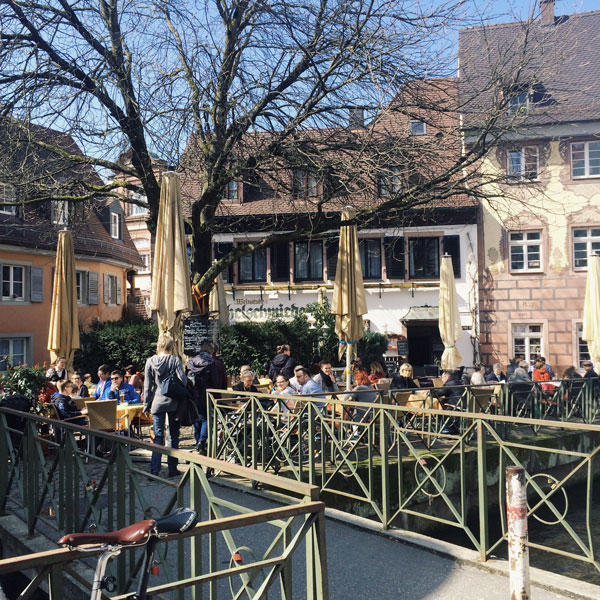 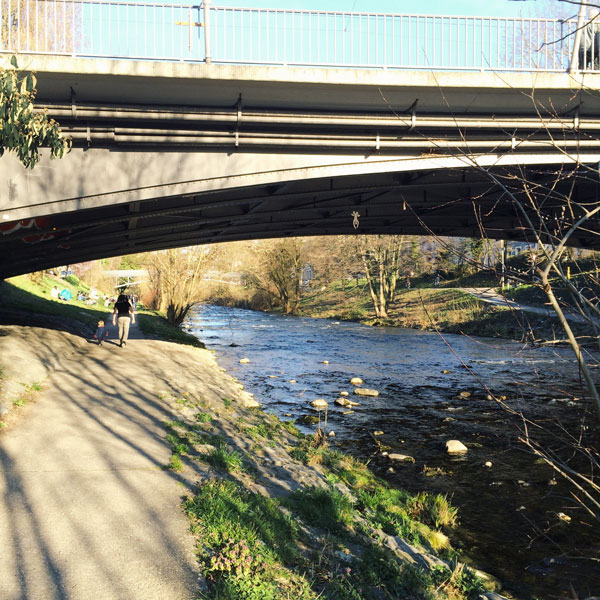 “The potatoes’ house” is a cool name, right? That says it all, it is a restaurant focused on potato, in all these states! Nothing can make me happier 😍 In good German I became, I took a Schnitzel-Pommes (a huge piece of typical breaded meat with fries). My boyfriend, as a true German, took a Wurstsalat-Bratkartoffeln (a sausage salad with fried potatoes, a whole program) and our friend had a potato gratin. Everything is served with a salad on the side. It costs between 1€0 and 15€ per dish.

I highly recommend you this restaurant, especially if you are really hungry! It’s good, served in big portions and cheap! Btw, better to book a table, it’s really full all the time. 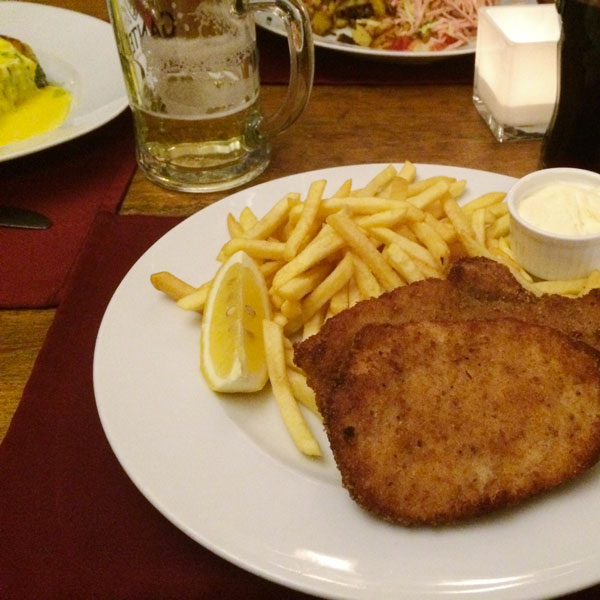 Another funny name! Mehlwaage is the name of the balance for flour. The restaurant is located in the middle of the old town, we were sitting on the terrace since it was super nice outside and it’s really super cool to stay! The specialty of the house? The flammekuche! I had some reluctance to try their flammekuche because my boyfriend make the best flammekuche in the world (in my opinion) but we shared a Flammkuchen mit Rahm, Bärlauch, Kartoffeln und Käse (cream, garlic, potato and cheese). It was not bad, but less good than at home 🙊 We also tried the Käsespätzle mit Bärlauch. The Spätzle is the german pasta. It tastes like Italian pasta but looks like gnocchi. It was not too bad either, with cheese and garlic!

The dishes are between 7€ and 10€, which is relatively inexpensive! I advise you to go there in good weather and sit outside! 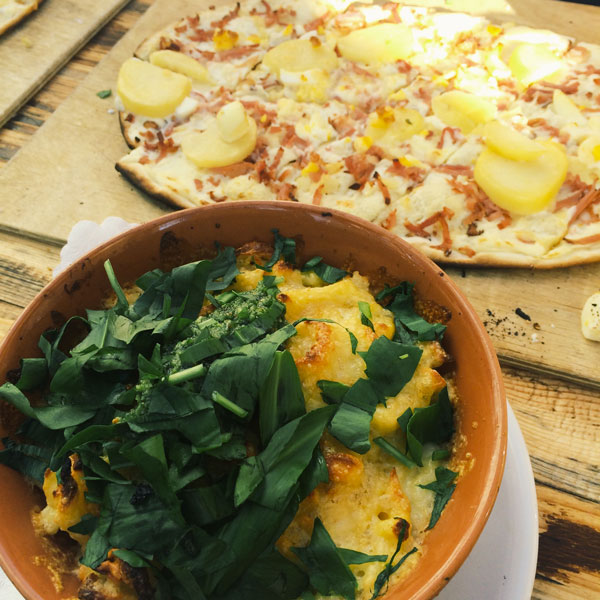 All dark, old, filled with students. That’s how we can describe the Café Atlantik. Drinks (including cocktails) are cheap, they serve food all the time, including spaghetti that really looked good! The best? It’s really cheap too! It’s 3.90€ for a small dish of spaghetti, 4.90€ for the big one. They also serve many vegetarian dishes. Super nice if you’re a little short on money and you’re not too fussed with the decor.

Here it is! I hope you enjoyed this blog post! Have you ever been to Freiburg? Do you know other addresses? If you go to Freiburg, let me know;) See you soon for more travels!